Back to all posts

Billboard's article on Los Wild Ones 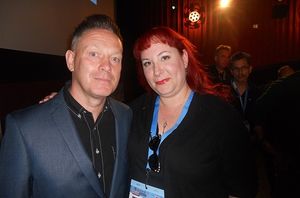 "I hate iTunes," Wild Records owner Reb Kennedy said after a Tuesday screening of the film about his label and artists, "Los Wild Ones."

"And I hate to compromise. But we lost to iTunes," Kenndy continued.

Wild Records, an independent Los Angeles label rooted in, but not limited to, rockabilly, will continue to press vinyl LPs, in addition to selling downloads, for the first time in its 12 years of existence. They'll be getting out of the CD business within a few months, which Kennedy, an avid record collector, has no problem with.

This year alone, Wild Records has released six albums, and Kennedy tells Billboard he will put out another 15 albums by year's end, stepping for the first time into the digital arena. They will continue to make records in their garage studio where complete LPs are recorded in single, day-long sessions.

"Los Wild Ones" director Elise Solomon found him when she was looking for music for a narrative feature. Taken by the stories of five or six of Wild Records' L.A. acts -- all of whom were Mexican-American -- she put the feature on hold to do the rock doc.

The film encapsulates a scene that's centered in the Echo Park section of L.A., but with a reach largely focused in Europe. "I wanted to show the scope of how much more this music is appreciated elsewhere than in the U.S.," Solomon said, noting that the bands may have a look that suggests the '50s but their styles pull in various eras of rock 'n' roll, country and blues. "This is all-encompassing music."

"They love the music, but in the Hispanic community, you see that they have no heroes beyond Lalo Guerrero, Ritchie Valens," Kennedy says. "Where are the [musicians] they can look up to?"